SPAIN ON THE BRINK OF SOCIAL EXPLOSION

The headline of this post is not a rhetoric sentence but the feeling of more than 70% of Spanish people, according to the survey published by “El País” last week-end. The most recent Labour Force Survey (EPA, Spanish acronym) can largely explain this spread unrest.

In 2012, 850.000 jobs were destroyed. The unemployment rate reached 26’02% (+ 1% than the former quarterly) and the estimated number of unemployed people was 5.965.400. In fact those figures should be worse because 125.000 Spanish people (mostly highly qualified young people) and 87.000 immigrants have left the country. 57% of young people are unemployed and there are 1.800.000 homes which all of households are unemployed. According to forecasts unemployment will reach 27’5% in 2013. They are the worst indicators of the Spanish history.

Let’s take a look at how change unemployed people lives according to the research commissioned by the most important radio station (“Cadena SER”).  44% of unemployed people have moved to parents or friends homes (7% have lost their homes due to mortgage foreclosures). 10% have bought their car. 14% don’t eat fish or meat anymore and 5% is usual user of food banks. 70% don’t expect to find a job in the next 12 months.

With respect to health, 50% of unemployed people fell into a depression, 40% lose self-confidence or have sleep problems and 30% loose contact with their friends. One out of three unemployed is “energetic poor”, in other words, they can’t afford minimum heating levels at home or taking a hot shower once a week.

And last but not least, the political consequences of unemployment, poverty and hopeless: 66% of unemployed people have lost confidence in democracy and 70% in the European Union.

Both Spanish and European Union leaders seem to be obsessed with bond spreads, deficits or government debts and they don’t perceive the risks of unemployment and social exclusion. They despise several other indicators that show the increasing unrest of more and more people –lot of them ex-middle class- who shout in the Spanish streets “that’s not a crisis, that’s a fraud!” or in front of the Parliament “No, no, no, they don’t represent us!”  Or perhaps they are proud of allowing the biggest transfer of wealth and rights from workers to capital in the last century in . In any case, impunity doesn’t last for ever.

January the 6th is the Three Wise Men Day, one of the most important Christmas events in . First thing in the morning children –and adults- open their gifts left by the Wise Men near the windows during the night, where everybody put their shoes. On the eve, before going to bed, children prepare lettuce for the camels, liquors for the Wise Kings –to face the cold night- and sweets for their assistants.

In the afternoon of the 5th of January, Three Kings processions go through the streets of every city and every town in the country.  The Wise Men, throwing candies from their floats, are greeted by crowds of excited children.

In the previous days the children send their letters to the Wise Men, explaining their good behaviour throughout the year and describing the gifts they expect to receive. The letter is sine qua non condition to have presents on the 6th of January, perhaps the most magical day in the year.

After this prelude I’ll go to the core of this entry. Yesterday, January de 6th, “El Pais” published two cartoons (see below) linked to the letters sent to the Three Wise Men. I’d like recall that “El Pais” is centrist oriented newspaper and the two well known cartoonists over 65 years age each one. That means that we are not talking about young radical artists or underground magazines but about senior graphic humorists always committed with democracy and the best seller Spanish paper.

I am deeply convinced that both cartoons show the current mood of the most of Spanish citizens: sadness, frustration and indignation.

P.S. Today, 7th of January, governmental statistics show that after three years of decreasing consumption of goods (cars, household devices…) in 2012, for the first time, the level as well as the quality of food consumption dropped in Spain. 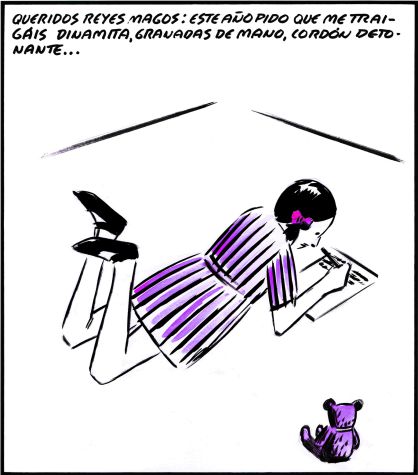 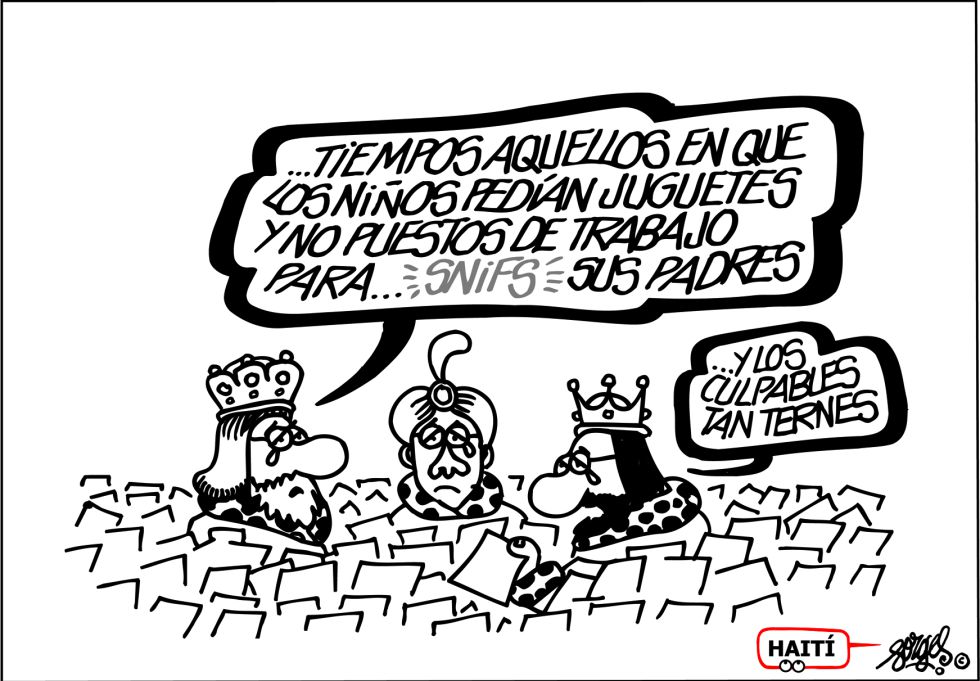 Everybody knows the Christmas Carol “White Christmas” which reaches this year the age of 70. The Spanish translation of “White Christmas” is “Blanca Navidad” and currently the source of a very popular word game difficult to translate. Instead of “Blanca Navidad” everybody speaks of “Navidad sin Blanca”, literally something like “no white Christmas” that really means “Christmas without money”. It’s easy to guess the origin o such a joke: 26% of unemployment (36% with no unemployment benefits), 3 million of public employees without Christmas allowance and frozen salaries for years and over 60% of workers whose gross salary is bellow 1.000 €, without forgetting new taxes on health, education, transport or justice services and the increase of TVA and income tax.

The lack of money will have a clear impact on consumption. This Christmas the average expenditure per person (514 €) will fall by 4% regarding 2011 and 38% comparing 2008 data. It’s expected that 191 € will go to food expenditure, 163 € to gifts (mostly for children), 82 € to the very traditional Christmas Lottery and 78 € to leisure activities.

The crisis will reduce the Christmas budget but also consumption patterns. On January the 6th the most of the children will receive (cheaper) Christmas gifts from the Three Wise Men (they are much more popular than Santa Claus in ) but no adults.  There is no place to whims or surprises; this is the year of useful gifts such as clothes, shoes or household appliances that should be replaced. And something unthinkable until now: second hand gifts are welcome.  One of the “collateral damages” of the sharp decline of consumption is the closing-down of one out of four shops.

A WEEK TO FORGET

This week different reports have seen the light of the day showing that has broken historical records (all negatives).  Last entry we addressed the issue of the Living Conditions Survey 2012. Today we’ll focus our attention on the Labour Force Survey (EPA, in Spanish) corresponding to third quarterly of the current year. We’ll stress the main findings and then we’ll try to reflect on them.

First of all, the EPA is one of the most rigorous surveys in and the only accredited by the EU in relation to unemployment.

For the first time in history unemployment rose above 25% (25’02%). That means 5.778.100 unemployed people, 3’2 million more than five years ago. 96.000 employments were lost in the last quarterly, half of them in the public sector (direct outcome of budgetary cuts). Men and people between 25 – 35 years old are the most affected by job destruction.  The number of fixed-term and part-time contracts grows up meanwhile permanent contracts decrease. There are 1.737.900 homes wich all of households members are unemployed. Unemployment is expected to rise next year.

And now, some comments on unemployment figures. Since 2010 both socialist and people’s parties agrees that labour market was the most important Spanish problem. High unemployment rates or temporary contracts were supposed to be the obvious symptoms of an inefficient labour market.  So in both cases they decided to reform labour market laws making easier and cheaper redundancies, reducing salaries, undermining collective bargaining, increasing the power of employers and weakening union’s competences, setting new precarious contracts…  The outcome of all theses measures is in the last EPA: more unemployment and more precarious jobs and an uncover result: the ongoing transfer from labour incomes to capital incomes.

By the way! A new record to take into account: more than 1.200 demonstrations have taken place in in the first nine months of 2012.

This week has been published the Living Conditions Survey 2012 by the National Statistics Institute (INE). This report is particularly significant because its statistical data are accredited and compatible for all EU member States. Let us see the main findings of the document:

Also this week the Government has announced that unemployment will continue growing in 2013, the economy will decrease around 1’5% and we’ll face new budgetary cuts.

Four different news items related with our last entry were published this week.  First of all, we will refer to the so called Red Cross “Día de ” (Little Flag Day). Every year, thousand of Red Cross volunteers take the streets carrying piggy banks asking for money.  People give some coins (or bank notes) and they receive in return Red Cross stickers (“”banderitas”). The amount collected goes to specific vulnerable groups abroad: starving population in African countries, poor people affected by the earthquake in or the tsunami in the and so on. But this year the Red Cross Day was different. For the first time in history the money shall be used to fight poverty in . This shows the current importance of poverty affecting Spanish people.  I suggest you to click the following link:

It’s a commercial (in Spanish) encouraging people to donate money to the Red Cross. The most striking image is the moment when volunteers aid to a father sharing a one-egg omelette between his two children.

It’s hardly surprising this situation taking into account that Spanish households loss 18’4% of their wealth in 2011. According to the Global Wealth Report by Credit Suisse is the largest drop of the Eurozone.

And finally we deal with the question of inequality. Eurostat shows an increasing gap between poor and rich people after the onset of the crisis. In fact never inequality had never before been higher. 34 was the Spanish Gini Coefficient in other words, the worst EU score out of . But results can be worse. According to the so called “Ratio 80/20” (relation between the richest 20% and the poorest 20%), is the winner in inequality (7’5) ahead of (7’3) and far away from (4’6) or (3’3).

Nevertheless, I’m deeply convinced that the most important finding is that all those reports agree that the source of poverty and inequality is unemployment, lower salaries and wages and social cuts. Austerity policies, in other words. Meanwhile, Van Rompuy today announced that is in the right track. Astonishing!

CARITAS REPORT ON POVERTY IN SPAIN

Caritas has just published the “7th Report of the Observatory on Social Reality” assessing the impact in of the current crisis. The most relevant findings of the report are as follows:

·         We witnessed a substantial increase of poverty, mostly due to unemployment and cuts in social protection. Nevertheless a job is not a guarantee of social inclusion:  2’5 million people (15% of working population) are poor workers.
·         Nowadays 25% of population is at risk of poverty, that means that shows emerging countries ratios.
·         During the years of economic growth, net social spending increased but not the social spending/GDP ratio.
·         In 2011, Caritas attended three times more people (over 1’1 million) than in the onset of the crisis. 40% of people attended were in chronic poverty.
·         The most vulnerable groups are young couples with children and immigrants. But the most remarkable fact is the increasing number of former middle class people demanding aid.
·         320 € is the average income of people attended by Caritas, that is 50% bellow of poverty threshold.

Poverty is sharply increasing as well as inequity. There is a growing mixed feeling of indignation and hopeless