Lot of news has taken place in in the past days but there is no doubt that the most important one is the new package of austerity measures (social cuts) adopted by the Government last Friday.

One week ago the Eurogroup decided to fuel up to € 100 billion to the Spanish banking sector. After that the Government declared that the loan was not linked to conditionality except for the banks needed of European money. Nevertheless two days later the Council of Ministers approved the most important pack of social cuts targeted on public employees and unemployed. I’ll try to summarise the most relevant measures:

Increasing TVA:  the Spanish TVA is below the EU average, it’s true. But it doesn’t seem a good idea to increase indirect taxes in the framework of decreasing economic activity. Furthermore, the TVA is counter-distributive and is one of the most unequal member states in the UE.

The aid for young people to rent flats has been reduced 30%.
In the other hand, employers’ social contributions will be reduced in 2012 and 2013.

The streets are burning. Spontaneous demonstrations take place everywhere. Senior officials or policemen join the protesters for the first time. Next time we’ll talk on social protests in . 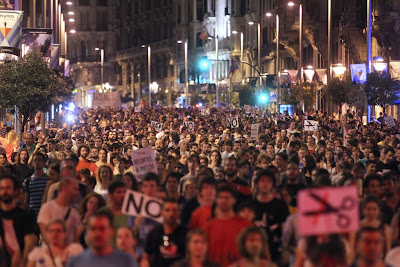